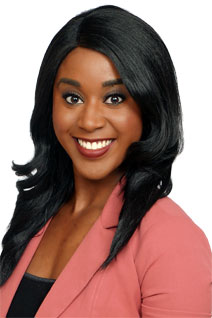 Deneysha previously worked at WIBW (CBS) in Topeka, KS (Market #144). While at WIBW, Deneysha started as a Multimedia Journalist and was promoted to Weekday Morning News Anchor in March 2019.

The Fredericksburg, VA native earned a Bachelor of Arts Degree in Communication from College of Charleston. While in school, Deneysha gained valuable television news experience working as a production assistant for WCIV, the ABC affiliate in Charleston, SC. Following graduation, Deneysha moved to Washington D.C. and became an on-air host for an independent news show called “Square Circle”. From there, Deneysha obtained a Media Specialist position with the U.S. Shadow Representative of the District of Columbia, Franklin Garcia. While in this position, Deneysha also hosted the Representative’s local news show, D.C. Statehood Today. House of Cards fans on Netflix might have even noticed Deneysha appearing on the hit show as a news journalist!

When she’s not on the anchor desk or reporting in the field, Deneysha enjoys spending time with her husband and daughter. #TeamCBK